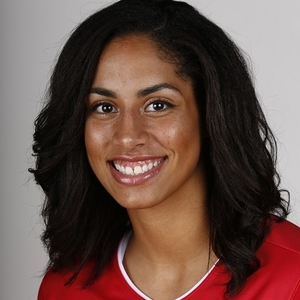 I am an optimist!
I very much believe with the right level of focus and discipline that anything can be accomplished. In the past, I have worked with all ages when it comes to volleyball. Setting can be taught to a 2 year old with a balloon as easily as all-out defense can be mastered by a 65 year old.
Communication is key with me, I structure my lessons based on the individual or the group and can provide high-intensity, fast-paced, cardio practices, as well as, more structured and precise, technical practices.
My teaching methodology revolves around the idea of self-evaluating, so there is a lot of mindfulness and analysis that goes in to learning new skills or concepts.

Alesha Wilson is currently a volunteer assistant coach with the University of Dallas Crusaders in Irving, Texas for the 2018 season.

Prior to coaching, Wilson graduated from North Carolina State University as a former middle blocker and Wolfpack athlete for life. During 2012, Wilson was named ACC Player of the Week; she was ranked second on the team in total blocks, ranked fourth in total attacks, and participated in the first NCAA tournament appearance since 1987 v Texas A&M University. Additionally, she garnered all-tournament honors and captainship in the 2013 and 2014 seasons.

In May 2016, Wilson earned her Bachelor of Science in Chemical and Biomolecular Engineering with a Spanish Minor.

Wilson has been giving lessons for over 5 years and has taught approximately 45 student-athletes at one time. Some of her former students have changed positions within their team, move from a freshman team to an upperclassman team, and some have gone on to accept scholarship opportunities to play in college.

“A person really doesn’t become whole, until he becomes a part of something that’s bigger than himself.” – Jimmy V