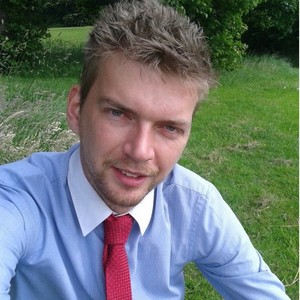 I am an English teacher with an MA degree in Education; Lifelong Learning. I am available for online tutoring and ESL conversation classes at a time that suits you.

I have 8 years experience teaching ESL both in my home country (U.K.) and abroad (South Korea and Thailand).

Rate for online lessons : $20/h
Lessons offered by Daniel
Individual
In group
The lessons will be held
webcam
Levels

I currently run an ESL company that promotes working abroad as a teacher, as well as conducting workshops to improve English speaking in international school, but am also looking to add online teaching to my skills offered once again, as I have previous experience in this.

I took a role back in Asia where I was invited back to work as a teacher of English in a highly esteemed academy in central Bangkok, Thailand. My role was both in a teaching capacity and as an advisor to other members of staff, assisting trainee Thai teachers in their education courses and assessing their lesson preparation. My experience and qualifications in education also meant part of my role included giving constructive feedback for improvement.

As a teacher of 'Opening Minds' in the Academy my role was to deliver classes on 'World Culture' to the students. My role included the creation of a scheme of work, creating my own resources as well as adapting existing material to outline a clear plan for the academic year. A lot of the material I created and delivered during the year was linked to my own experiences working abroad. This meant I was able to teach using resources and presentations that included my own images/media from around the world. I felt that this helped students to be able to engage with the material rather than simply presenting textbook information to them. I was also able to share real-life experiences to support their learning and enable them to acquire a wider perspective on the topics taught. As part of my role I was also responsible for deciding on effective forms of assessment at the end of each learning cycle and maintaining accurate records of results.

I was responsible for the promotion of global businesses targeting specific audiences relevant to each company. The role included using various marketing strategies such as Google keywords to improve the page rank of client’s websites. I was able to liaise with clients in order to generate a plan specific to their business needs, offering an honest consultation service before carrying out the necessary work.

I worked as a drama teacher, designing and delivering the curriculum to classes of varying ages and abilities. I was also responsible for the intake of new students working alongside the foreign supervisor. In addition to this my role included liaising with Thai staff to overcome any misunderstandings or cultural differences that occurred in the international staff department. This was an important role when new international staff arrived from different areas of the world.

In this role I was responsible for the promotion and delivery of English classes for adults. My job was to teach business workers from Asia about western culture and how to operate in a business capacity in the U.K. and U.S.A. This involved roleplaying work situations, or even teaching about typical customs in completing everyday tasks such as booking a hotel room or going out to dinner. It was important for me to display a combination of cross-cultural understanding and knowledge of business through use of my interpersonal skills.

I was responsible for the creation and delivery of a scheme of work at a private arts academy in South Korea. My role included promoting the academy to the relevant target audiences and conducting the interview process for both new students and teachers at the centre. I was also responsible for offering confidential private one-to-one tutorials and support to students for issues both in their courses and at home. As an experienced teacher in Asia, I was also employed to help new short –term members of staff arriving from the U.K. and the U.S.A., ensuring they had a smooth transition to life in South Korea.

This was a temporary role I was chosen to be employed for designing and editing questions for a textbook. The textbook focused on Asian people learning about western culture and how to operate within a different society. For example the questions I created related to basic conversational English in public places or the extracting of information from a newspaper advert. Upon completion of the textbook adult learners would take their TOEIC English abilities test to determine if their proficiency in English was strong enough to gain employment overseas. A good TOEIC score is required by many companies in Asia for those people wanting to take up roles overseas.

This role consisted of using a combination of my own resources with an accredited textbook to deliver English classes to speakers of English as a second language. The students were of varying ages and abilities so an adaptable approach was required to be taken to ensure that all participants were able to learn in my classes.
Part-time - Feb 2009- April 2016 (Part-time alongside other full-time roles) Project Coordinator, Performing Earth

This has been a part-time project I have run alongside my other full-time roles. The project started in Seoul, South Korea, where I was responsible for the creation of a new programme to use drama as a tool to teach English as a second language to both young students and adults. It was successful and I managed to acquire funding to take the project further and grow its reputation.
I have been responsible for the promoting and marketing of the project as well as the delivery of Performing Earth workshops and events around the world. I also have been solely responsible for offering confidential one-to-one support meetings for all participating students, and in some cases staff. In addition to this I have set up international student exchanges from Asia to the U.K. for Asian education agencies, managing staff and making new connections to further the options available to students wishing to study overseas.


Some of the institutions I have worked in as project coordinator of Performing Earth;

This was a part-time role as an actor in an NHS promotional campaign to make people aware that mental health issues can occur in the lives of high profile footballers just as much as other work. The aim of the commercial was to encourage people to seek help for mental issues before the problems affect their day-to-day lives.

I was invited to be one of a number of people from different countries around the world on to a new comedy show filmed in San Francisco to talk about the success of the ‘Performing Earth’ project. I was interviewed by comics Derrick Leonard and Howard Meehan about the aims and goals of the project and where I was planning to take it in the future.