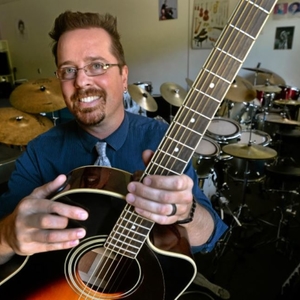 An accomplished conductor and musical director, Jesse has a number of graduate degrees in music (B.M., M.M., M.M.Ed). He has toured both Europe and the entire United States after winning a concerto competition for the Marin Symphony. He has recorded with the Taipei Symphony on the “live” Air Supply album “Now and Forever” and later performed with the Boston Philharmonic. For over the last decade, he has brought his awesome talents to The Hackjammers, Rock Skool, and Unchained.

In 1999, he began his career teaching music at the Brandeis Marin School. As the Music Director and Instructor, he has guided his students’ musical futures – some go on to become songwriters, some choose to major in music at college, and one of Jesse’s students became the lead guitarist for singer John Legend.

I tailor all my lessons to my students' needs. No two classes are the same. I believe in building the self esteem for learning so that the student feels confident in their work. I also believe that the student should choose songs with the teacher to learn.

Other tutors in Guitar

All of our reviews are collected by us and are 100% reliable. They correspond to a real experience lived by students with Jesse.