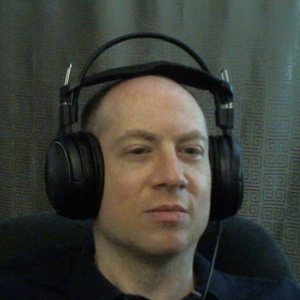 Learn the standard American accent; start to sound the way Americans actually sound, with a tutor born and raised in America, who has taught thousands of hours of pronunciation lessons.

Jonathan is one of our best tutors Accent reduction - English. They have a high-quality profile, verified qualifications, a quick response time, and great reviews from students!

I'm available in the morning in the New York time zone. (That's the afternoon and evening for Europe and Asia.) I'm available every day except Thursday.

Please watch my video, which you can find at the bottom of this page. Here is the text of that video:


Hi, I’m Jonathan. I was born and raised in America. I am a native speaker of standard American English.

I’m an English pronunciation tutor. I teach adult students whose level of English is intermediate or advanced. I started teaching English in 2017. I have had students from many countries in Asia, Europe, and South America.


First I will tell you what I am not going to teach:

I am not going to teach grammar rules. I am a pronunciation coach.

I might not teach you what you learned in school; I might teach you something totally different. What is taught in most English classes around the world is a lot different than how we talk here in America.

If you take lessons from me, you’ll make progress acquiring the standard American accent. You’ll also get some practice with your fluency; I want to coach you on your pronunciation while you’re talking, so I’ll make general corrections and suggestions in addition to helping you with your pronunciation.


I’ll coach you while you practice your pronunciation by reading out loud and talking. Sometimes students have material that they want to read. Otherwise, I have list of limericks, song lyrics, and movie scenes to read.

Limericks and song lyrics will help you get a strong sense of the rhythm of English. Movie scenes are helpful for improving intonation.

I’ll also coach you on your pronunciation while talking, to help you get in the habit of talking with the American accent during normal conversation.

I also have pronunciation exercises to help with particular sounds that are often confusing or difficult.


Now that I’ve been helping students with pronunciation for a few years, I’m able to hear the subtle things that cause someone to have a foreign accent, even if it’s only a slight accent.

All of my students make progress. On average, my students reduce their accents by about half, after 40 hours of lessons with me.

I don’t assign homework, but I recommend that you do shadowing and practice pronunciation between lessons.


There once was a farmer from Leeds,
Who swallowed a packet of seeds.
It soon came to pass,
He was covered with grass,
But has all the tomatoes he needs.

Now pause the video and say it yourself.

You need to be able to say “dz” to say “Leeds,” “seeds,” and “needs.” Dz. Say “dizzy.” “Dizzy.” Dzzzz. Dzzzz. Leeds. Seeds. Needs. If it’s difficult for you to say the dz sound, make the E sound longer: Leeds. Seeds. Needs. Then practice saying those words, and after you say them a few dozen times, it’ll get easier.

There once was a farmer from Leeds,
Who swallowed a packet of seeds.
It soon came to pass,
He was covered with grass,
But has all the tomatoes he needs.

There is no way that this winter is ever going to end as long as this groundhog keeps seeing his
shadow.

There is no way that this winter is ever going to end as long as this groundhog keeps seeing his
shadow.

I don't see any other way out.

The important words are “I” and “any.”

I don't see any other way out.

He's got to be stopped. And I have to stop him.

He's got to be stopped. And I have to stop him.

I don't see any other way out. He's got to be stopped. And I have to stop him.


If your goal is to sound American, I’m ready to help you out; I hope you’ll schedule a lesson.

Hi, I’m Jonathan. I’m a pronunciation tutor. I’ve taught thousands of lessons over the past few years, to intermediate and advanced students, who want to speak with the standard American accent; the accent that most Americans and Canadians have.


In 120 hours, you can make big improvements in your pronunciation; that’s 60 hours of lessons with me, and 60 hours of practicing on your own.


Actually my lessons are not a full hour, they are 55 minutes long.

All of our reviews are collected by us and are 100% reliable. They correspond to a real experience lived by students with Jonathan.

My lessons are 55 minutes long, $15 per lesson. The first lesson is free.