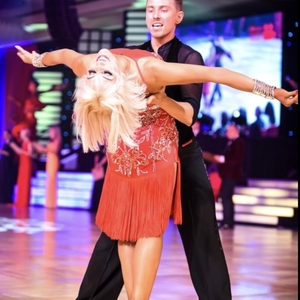 Hello, we are ballroom couple originally from Eastern Europe. We own a dance studio E&A Dance, that welcomes all levels of dancers, including dancers with 2 left feet. Our methods are proven to get you to fast results in learning ballroom dancing. We accept in-person and online students.

Originally from Belarus, Eugene began taking dance lessons when he was 7 years old and not too long after, he started competing in various dance events. Eugene continued to compete all over Europe for the next 10 years. In 2006 he was accepted to Belorussian State University of Sports, where he studied physical education and ballroom dance. Shortly after that he was hired part time to teach kids and adults at a local dance studio. In University he joined a National Ballroom dance formation team “Univers”. During those 5 years the team won many titles including national championships and placing in the finals of World and European Championships.

Anna was also born in Belarus. She started dancing at the age of 9. She received strong training in International Ballroom and Latin styles and received a lot of national and international awards throughout her dance career. After high school she was accepted to Belarusian State University of Sports. She joined a ballroom dance formation team “Univers”, where Anna became 5 time national champion and took 4th place at the world championship. Looking to share her passion for dance she took a job teaching ballroom dance at the Belorussian State Medical University where they both with Eugene were teaching adults how to ballroom dance.

In 2012 Eugene and Anna moved to United States to continue their dancing and teaching career. They successfully competed in American Style Rhythm and Smooth and constantly train with U.S. and the world’s top coaches.

Eugene and Anna's mission is to inspire for positive changes into people’s lives through ballroom dancing.