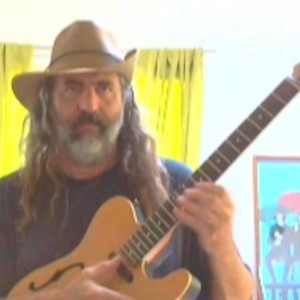 You only need minimum practice per day.
Your mentor has worked with top players.
Play practically any song using clear and easy fundamentals.

Paul T. Harrison is one of the leading authorities on Rock and Blues guitar. He has worked with countless legendary greats, taught over 5000 students at a Guitar Institute that he founded and directed for more than 20 years, and he is one of the pioneers of interactive online guitar games. His system of theory transcends any memorization system through the use of computerized ear training and other original technologies that induce spontaneous exponential improvement.
Paul was born into a classical music family and by age 12 he had already become a soloist and honor student in a choir that sang with the New York Philharmonic numerous times when he was mentored by Leonard Bernstein while performing on major label records, touring, and on national TV. At 15, Paul was living in Greenwich Village, where he played his 1st electric guitar gig at the Cafe Wha? where he met Jimi Hendrix, along with scores of upcoming legends that were working their way up the ladder through the amazing musical hotspot neighborhood of the era that created rock and blues electric guitar.......